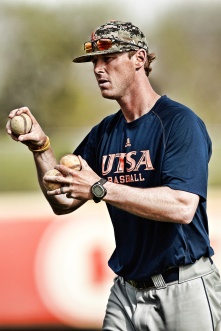 Coach Josh Lee spent seven seasons as an assistant baseball coach at Southwestern University (Georgetown, Texas), McMurry University (Abilene, Texas) and most recently at the University of Texas at San Antonio for three seasons before beginning full-time work with the San Antonio Angels select teams in the summer of 2012. Lee, an all-American college player at McMurry, was also a 2004 MLB Draft pick in the 30th round by the Detroit Tigers. He has passion for the game of baseball and is committed to helping others further their enjoyment and skills of the game.

Coach Lee worked with hitters and outfielders at UTSA and saw Riley Good be named a Freshman All-American by Collegiate Baseball after posting program records with 86 hits (third in NCAA among freshman) in 2011. In 2010, Lee helped guide Ryan Dalton to Southland Freshman of the Year and consensus Freshman All-America accolades after tying for the conference lead with a program frosh-record 17 home runs (second in NCAA among freshmen) and leading the Birds with 51 RBIs.

Lee joined the UTSA staff in September 2009 after spending three seasons as a coach at his alma mater, McMurry.

He spent a total of seven years at McMurry, first as a player from 2001-04 and again in 2006 and from ’08-09 as an assistant coach. He also spent one season, 2007, as an assistant at Southwestern University in Georgetown. As a coach, Lee helped McMurry win the fourth American Southwest Conference (ASC) title in school history in 2008 and make a fourth trip to NCAA Regional play.

As a player, he helped McMurry win conference titles in 2001 and ’04 and was one of the most successful players in program history. He launched a then-school-record 33 home runs during his career, including a then-ASC-record 17 as a senior. Lee, a 2004 second-team All-American and four-time all-conference honoree, currently ranks among the top 10 in hits, doubles, home runs, RBIs and slugging percentage.

As a pitcher, he won 20 times in 39 starts and completed a school-record 17 contests during his career. Lee also ranks third in program annals with his 180 strikeouts and sixth with a 3.90 ERA.

Lee is married to the former Stacy Hysinger and the couple has a daughter, Ava.